Songs of Root and Sky

I’m a city girl. For most of my life, I’ve lived in SoCal, with a brief stint in Berkeley as a young teen. My family moved around a lot, but the closest we got to anything resembling raw nature was in my earliest years, when we lived just a few blocks from the Pacific Ocean in the smallish city of Hermosa Beach. In the summers, as my shoulders darkened to a deep brown, and my young feet and fingers dug happily into warm sand, I was lulled by the lavish roar of ocean waves. But it wasn’t until I turned fifteen that I paid much attention to birds.

I’ve written previously on this blog about my appreciation for crows, those intellectual giants of the avian world, as well as my sorrow over one particular member of that species, Mr. Crow, whose plight elicited the communal action and angst of my little neighborhood, sandwiched between a couple of L.A.’s busiest thoroughfares. But if I have to be honest, mockingbirds have always been my favorite birds.

In the summer my family moved back to L.A. from Berkeley, partially in response to a wildness coming over their youngest child, I woke one morning to a fascinating variation of triadic trills. Its source was what I would later learn was one of the more inaptly named creatures on this planet – a mockingbird. This bird wasn’t mocking; it was rhapsodizing, celebrating, jubilating. The purity of its tone and exuberance of its reach lifted the covers off my bed and thrust my body into the backyard, where I managed to get a glimpse of a gray and white fantail before the indignant bird swept out of its tree, scolding raucously.

I suppose it was no accident that a window opened in my heart that morning to the musicianship of birds. I was in love. From my parents’ perspective, he was way too old. (He was.) From my own, he was magic. (Ultimately, not so much.)  A poet, a filmmaker, a tall glass of milk of a man, he introduced me to Alan Watts, Gurdjieff, the pleasures of the body, and the shock of an illegal Tijuana abortion. (And yes, Virginia, there really were days when that was one of the very few options for lost young girls, overburdened women, and victims of rape, lack of education, access to contraception, or a patriarchally conditioned inability to voice the word, “No!” I shudder to think that we are at risk of returning to that hell again.) Like thirteen-year-old Fleur Robins in The History of My Body – who sacrificed the future of her Baby X with no little anguish – I fell into a chaotic swirl of terror, sorrow, guilt, relief, and a dawning sense of awe at the difficulty of being human.

Fleur learned at a young age that serious loss is tolerable only if we can manage to secure our absent beloveds inside the deepest chambers of our hearts. She felt her way through the leadenness of grief to scoop up the spirits of her beloved grandfather, Baby X, a fallen sparrow in her abusive father’s garden, and a rose in one of her mother’s invisible flower beds that had succumbed to root rot. Years later, in the aftermath of her 21st birthday, she came to find a sound track to soul-saturating experiences of loss and longing in tizita, the sensuous musical form arising from Ethiopia’s rich soil. And just as the discovery of quantum physics transformed the life of her mind in Book 1 of The Fleur Trilogy, in Tizita her melancholic dance with her Ethiopian-born fiancé led her unerringly, if messily, exactly where she needed to go.

When the loss of my first young love emptied me out, my own tizita led me to find an avian soul brother in the mockingbird protagonist of  Walt Whitman’s Out of the Cradle Endlessly Rocking. I mooned over Leaves of Grass for long, solitary hours spent on twilit lawns and sun-drenched spots on UCLA’s Janns Steps, hunched over a green-clothed hardback containing Whitman’s aching stanzas:

Is it indeed toward your mate you sing? or is it really to me?

For I, that was a child, my tongue’s use sleeping, now I

Now in a moment I know what I am for, I awake,

louder and more sorrowful than yours,

A thousand warbling echoes have started to life within me,

O you singer solitary, singing by yourself, projecting me,

O solitary me listening, never more shall I cease

Never more shall I escape, never more the reverberations,

Never more the cries of unsatisfied love be absent from me,

what there in the night,

By the sea under the yellow and sagging moon,

The messenger there arous’d, the fire, the sweet hell within,

The unknown want, the destiny of me.”

All this, and more, came to me during this morning’s walk when I turned a corner to hear a snippet of an avicular aria that I couldn’t help but record. Sadly, the mockingbirds have pretty much ceded occupation of my own block to the corvids over the years, but I was thrilled to discover that they’ve held their ground several streets away in the shadow of some of the city’s tall office buildings.
The thing about birds is that, even amid monstrous buildings that vex the skyline and rob neighborhoods of sweetness and serenity, their fortunes are inexorably bound up with the fate of trees. As are our own. Which takes me to an unfolding drama I witnessed via a thread on the Nextdoor app concerning a nearby neighborhood, where eighteen 50-foot Tipuana tipu trees on one residential block had been sentenced to the sawmill by the City Council for the crime of  buckling the sidewalk. The residents were thrown into a state of lamentation and mobilization to see if they could save their trees. 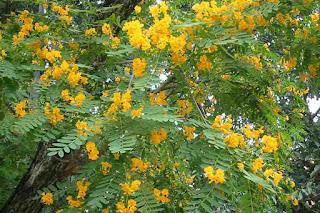 The posts on that thread ran the gamut from practical ideas for replacing the sidewalks with flexible, rubberized versions used in nearby Santa Monica to equally practical reminders that one tree makes oxygen for ten people, that they cool the area and provide a habitat for creatures of all sorts, including squirrels, crows, and mockingbirds. The opinions expressed were hardly unanimous. Objections to retaining the trees were voiced, insisting that buckled sidewalks are hazardous to the very young, the old, and the disabled. Suggestions were made to replace the trees with ones with less invasive root systems. Memories were called up of trees that individual members had grown up with, trees that had become friends and comforters over the years. More than a few folks called attention to the fact that the Threatened Eighteen offered wild splashes of color, soothing shade, and softness to their street. One or two saw the trees as venerable elders. Nosy Parker here – it isn’t, after all, the street where I live – spoke of our own neighborhood’s grief when the trees on our parkways began to die and how one resident, a self-identified outsider who’d recently lost both parents, actually changed his own life as well as our own by mobilizing the whole block and the slow-as-molasses City of Los Angeles to plant beautiful camphors to replace them. For those of us who took care to provide deep watering to our saplings, ten years have seen them grow into sweetly-scented shade trees that satisfy the much-needed wildlife in our urban environment. 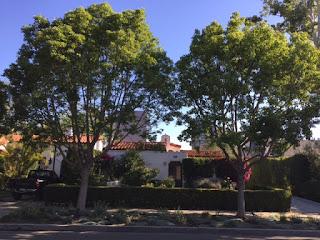 But the Tipuana tipu trees weren’t dying. They were, for at least some people in that nearby neighborhood, revered ancestors.
As I read the ongoing commentary, I had a numinous vision of invisible connective lines springing up to link ensouled strangers whenever they gave voice to their concern and love for our shared social environment and our beautiful, beleaguered planet. It was as if I was being offered a peek into the living reality of physicists’ string theory and the heaven of the Hindu god Indra that helped inspire Fleur’s epiphany about C-Voids, the idea that won her a Nobel prize. Except my own gift was a desperately-needed hopefulness for our endangered species if only enough vibrating strings could be created from the singing of each of our songs.

And speaking of linking, I felt moved to share my vision with my dear friend Carolyn Raffensperger – the environmental lawyer and executive director of the Science & Environmental Health Network whose TED Talk on Becoming Great Ancestors will knock your socks off. Carolyn pointed out to me that biologist David George Haskell has discovered that trees have their own songs. She related to me how she’d learned from people who care for trees that they have a consciousness and intentionality: communicating with one another through their roots (much, I think now, as Jung suggested that we humans connect with each other, our ancestors, and humanity’s future via the collective unconscious). Older trees actually sacrifice their share of water to enable saplings to survive. Carolyn suggested that the trees might be buckling the sidewalks to activate a consciousness of community among the humans in their midst.
Carolyn also referred me to the estimable Sandra Steingaber’s eloquent and informative essay Shale Game about trees, buckling sidewalks, and the dangers of fracking. Sandra’s article ends with her young son’s comment, “We shouldn’t wreck this place down, right, Mom?”
Which is where the trees, the birds, the ocean, and we come in. Becoming great ancestors, celebrating this mystery of life we’ve been blessed with, discovering the depth of our interconnection, owning our darkness, mourning our losses with great feeling, and ensuring a good life – and life, period – for future generations is a good part of what we were born for. I tip my hat to my first mockingbird for setting my feet on this path of discovery.
Oh, and we’re also born to boogie. Just try to sit still as you listen to James Taylor and Carly Simon’s rendition of her song, Mockingbird. May you get up and dance, sing your own songs, become great ancestors, and “ride with the tide and go with the flow.”

No comments to show.