The History
of My Body

A twist on the traditional coming-of-age story, The History of My Body is Fleur Robins’ own telling of her quixotic attempts to save her beloved grandfather amid a hectic household composed of a crusading pro-life father with a distaste for actual children, a helpless wreck of an alcoholic mother, a middle-aged nanny with all the finesse of a Mack truck, a flatulent ex-nun, and a peripatetic population of babies saved from “the devil abortionists.” Is Fleur autistic or gifted? Most people find her more than a little odd, with her penchant for pinching and flapping, fondness for fanciful word play, and preoccupation with God and the void. When Fleur fails to revive a dying baby bird in her father’s garden, she sets in motion a series of events that thrusts her into the center of a culture war over the reach and limits of the human imagination.

Fleur’s obsession with black holes brings her to the attention of Stanley H. Fiske, a quantum physicist with a face like a frog and a flair for magic tricks. When Fiske brings Fleur to Caltech, she develops a controversial theory of dematerialization. But Fleur has more than physics to learn about. She must surrender precocity, pride, and a crippling attachment to the past to repair a ruptured friendship and savor the luminous lunacy of her own youth. 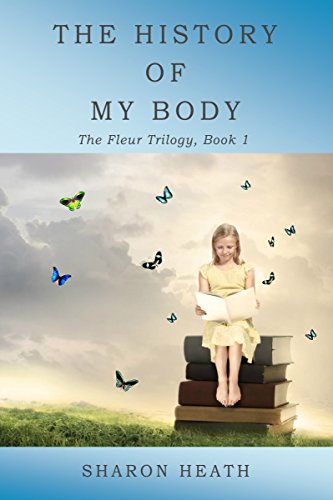 In her wise, superbly crafted debut novel, author Sharon Heath connects a series of highly improbable events into a tightly knit story about a self-taught young girl who believes her coming of age is a wonderful example of the butterfly effect: or, as Fleur came to understand nonlinear systems, a personal development with a sensitive dependence on initial conditions."

If you've ever wondered what it's like to be inside the mind of a quirky young girl that some people consider autistic and others a genius, you must meet Fleur Robins, Heath's enchanting protagonist of The History of my Body."

Sharon Heath's tragicomic novel is a laboratory to observe a homely caterpillar metamorphosing into a butterfly flapping her wings and changing the world. In the chrysalis of Heath's story, the butterfly effect transforms physics and biological facts into juicy, universal myth. Oh the joys and sorrows of inhabiting a young girl's body in the swish and swirl of sex, food, death, politics. Live them all here in their riotous complexity with Fleur, our historian of the body and the body politic."

The Science and Environmental Health Network

If you're anything like me, Sharon Heath's luminous The History of My Body will have you on the horns of a delicious dilemma immediately. You'll want to rush through the story to see what happens next, even as you'll want to linger on each page for the sheer glory of its language. Sharon Heath is an exceptional writer and The History of My Body is an extraordinary novel. Our heroine, Fleur, has moved into my pantheon of favorite fictional characters. She is, by turns, beguiling, funny, brave, exasperating and heartbreaking. The supporting cast is equally delightful—these are definitely people you'll want to spend time with. As Fleur comes of age, lurching from crisis to acclaim and back again, she captured my heart, as I'm certain she'll snag yours. I left her world with the greatest reluctance, but I have two consolations: The Fleur Trilogy Volumes Two and Three await. Highly recommended."

Sharon Heath’s sense of irony is both savory and sweet, transporting us into a world where the improbable is at once real and mysterious, and where the sparkly presence of a memorable girl named Fleur will remind you that true wisdom is born of innocence."

Reclaiming the Inner Child and Meeting the Shadow